SuperFail… this one is tricky for me because I don’t love this book and I usually only write about books I really enjoy. But I am sharing my thoughts on this book because there are things I did love about this story, even if there were things I didn’t. I also think it could be a good book for some reluctant readers because graphic novels like this can be great for older kids that don’t have the patience for chapter books. Sometimes I think I am too picky or have too high of expectations. When I first saw SuperFail, written by Max Brunner and illustrated by Dustin Mackay, I got really excited. A story about kids with super powers that aren’t so super?! I couldn’t wait to read it to my kids. The story was good. It’s about kids that have powers that don’t work right or are pretty awful. They are called “Defectives” and a joke among those will truly superior abilities. This is a story about a 12 year old boy named Marshall, a kid with laser eyes and the ability to fly. The problem is that Marshall is cross-eyed and gets motion sickness when he flies, so his abilities aren’t very super in action. It doesn’t stop him from wanting to be a hero, all he has to do is find away to prove he has what it takes. Overall, the story is entertaining. He perseveres and ultimately becomes the hero he sets out to be. But as a role model, he’s pretty lacking. I wanted to love Marshall, root for the underdog, but I just didn’t like him. It reminded me of the Diary Of A Wimpy Kid books, and not in a good way. Marshall is obsessed with proving himself so he can be popular and liked by others, and it just feels shallow. He doesn’t want to be a hero so he can help people or be a good person, it’s really just about popularity. Marshall isn’t very nice either. He isn’t a very good friend and is pretty rude. It’s intended to be comedic and is funny sometimes, but I just didn’t love him as a character. He does grow by the end of the book and acts more like a super hero should, but it didn’t make me like him just because he acted like a decent person. So what did I love? The story demonstrates that you don’t have to be super to do super things. That being popular and cool doesn’t make you a good person. And that you should never give up or believe what others say about you. I LOVE the message that you’re not “defective” just because others tell you that you are! But I am glad I read it with my kids because it gave me a chance to discuss with them things that bothered me, like peer pressure and intentionally exposing someone to a life threatening allergic reaction. That being said, my kids enjoyed the story and the great illustrations. 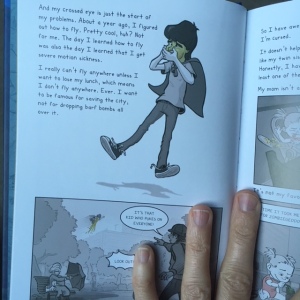